Weird Furnace Noises, and What They Mean 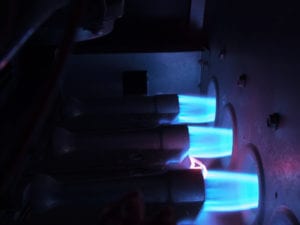 You need to be especially vigilant for signs that your furnace is developing issues during the winter season this year. The daily temperatures are reaching extreme lows, which means you’re likely placing more strain on your furnace that increases the likelihood of issues developing. We’re not suggesting that you go without heat, of course. Merely that you take steps to ensure that your system stays in the best possible shape. One of the ways you can do that is actually to listen for warning signs that your furnace is in trouble. If you’re not sure what to listen for, read on.

Inside the furnace is a part called the air handler. This is basically a motor that turns a large fan to circulate air throughout the home while the furnace is running. Moving that much air isn’t easy, so to help the system cope there are a number of oiled bearings installed inside the motor to lower friction. This works well, for a while, but the bearings themselves have a shelf life. Eventually, they will wear out and need to be replaced. As the bearings wear down, the friction on the system increases and it will begin to make a loud grinding sound. When you hear that sound, make sure that you call for repairs right away. The bearings will need to be replaced quickly, before the entire motor burns out and you have to replace it.

If your gas furnace makes a loud booming sound every time it turns on, chances are you have a problem with delayed ignition. This is what happens when carbon particles build up on the burner jets in the assembly, which eventually causes them to start igniting later than they should. When the jets finally ignite, they burn through all of the excess gas at once to create that booming sound. Fortunately, this is a pretty easy fix. Just make sure that you have a professional clean out your burner assembly, and that should resolve the problem. You’re going to want to get it done sooner rather than later, however. Eventually, the assembly will become so clogged that none of the jets will be able to fire at all.

If your furnace is turning itself on and off every couple of minutes, you need to have it looked at by a professional right away. That kind of behavior is called short cycling. It’s caused by heat becoming trapped in the furnace, either because of an electrical malfunction, an air handler issue, or a clogged air filter. Short cycling significantly increases the wear and tear that a furnace accumulates over a short period of time. At first, the issue will only prevent the furnace from heating as well as it should. Longer term, though, it will cause the system to break down more often and shorten its lifespan by a number of years. That’s why you need to have it repaired right away.

Tags: Furnace Repair, Kearney
« Wondering When to Get a New Water Heater? Look For These 4 Signs
Types of Water Heating Systems to Consider Installing »

We serve areas from St. Joe to Cameron, from Belton to Olathe, and everywhere in between.

Do we serve your area?